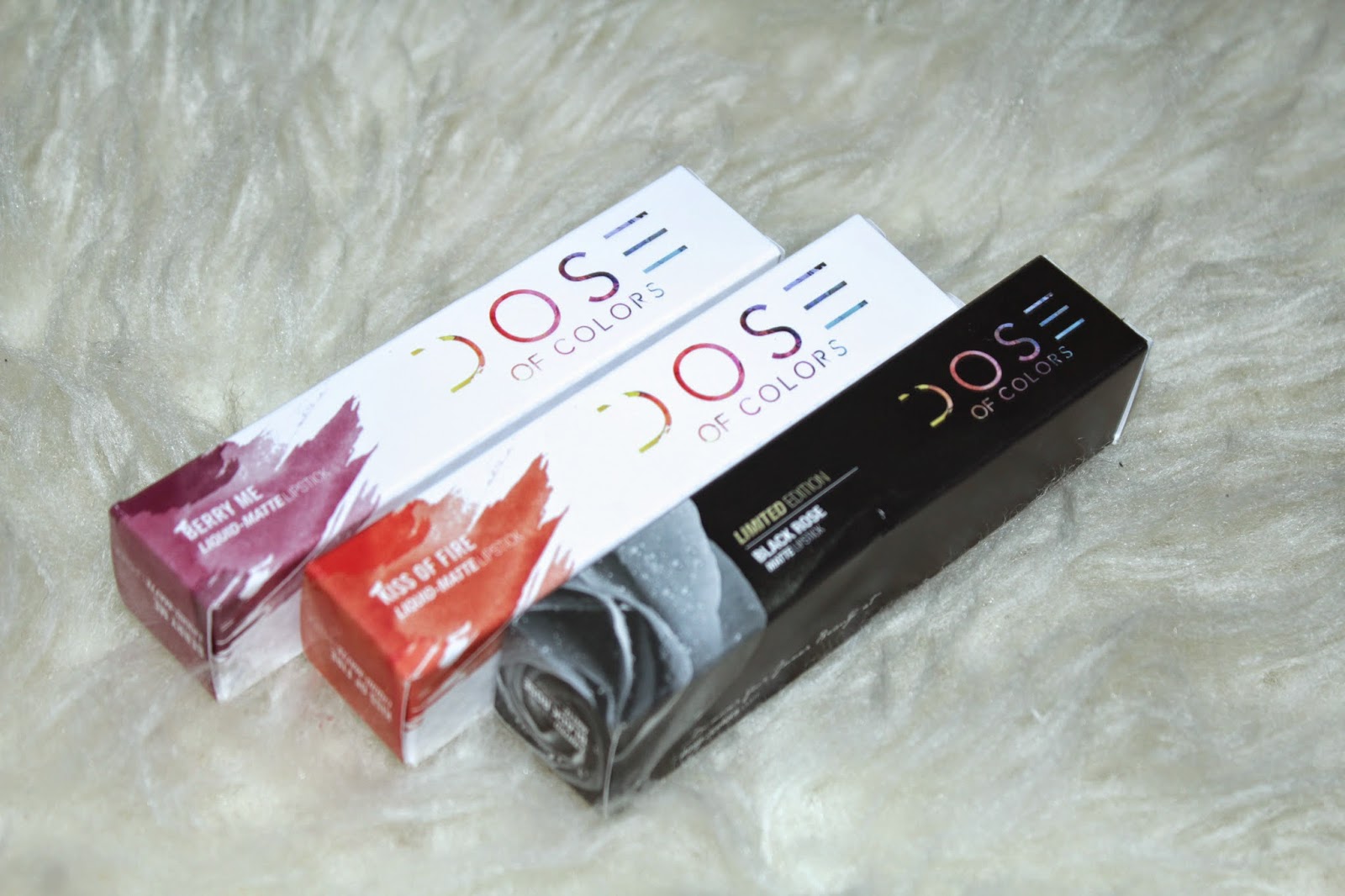 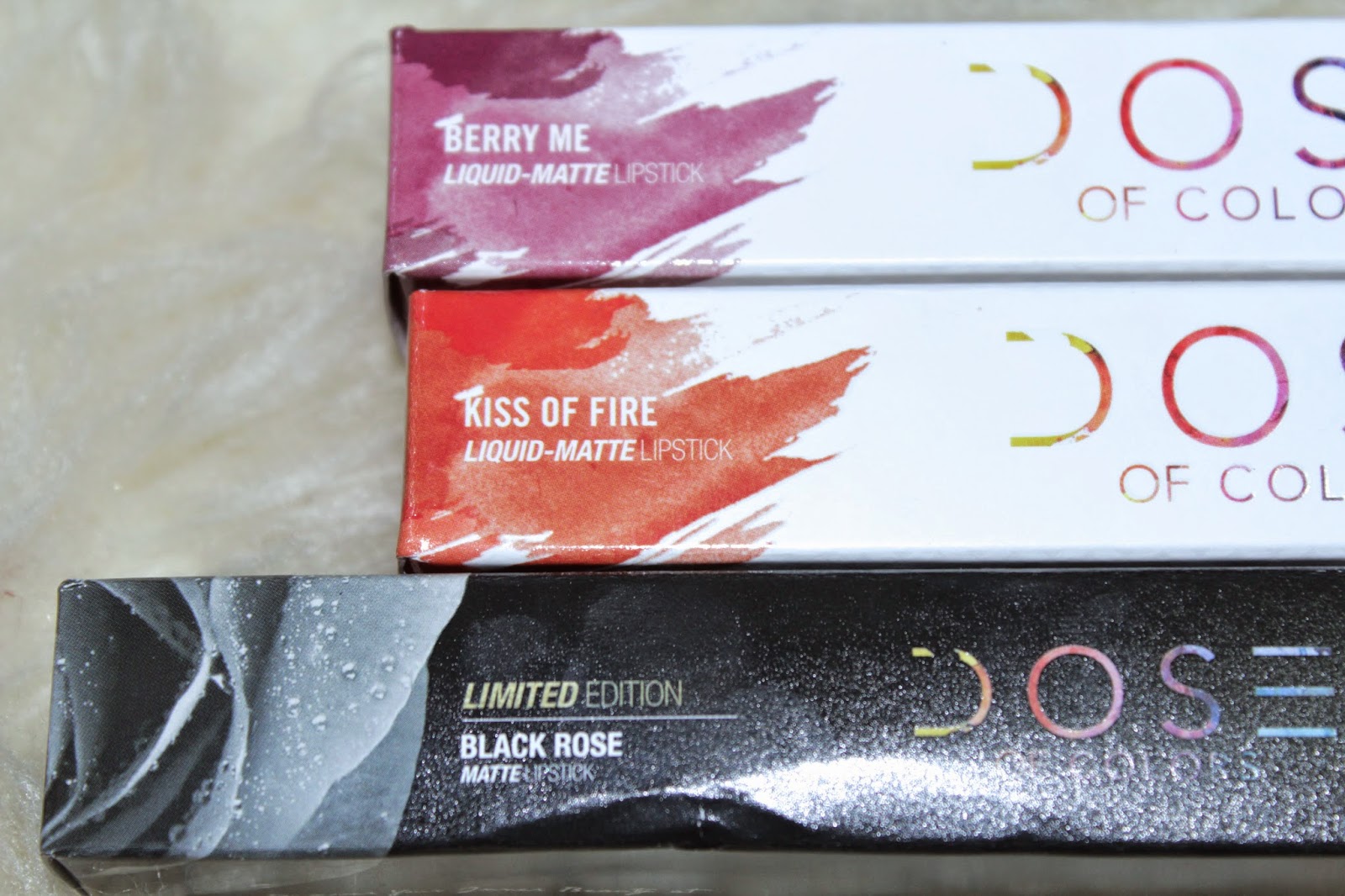 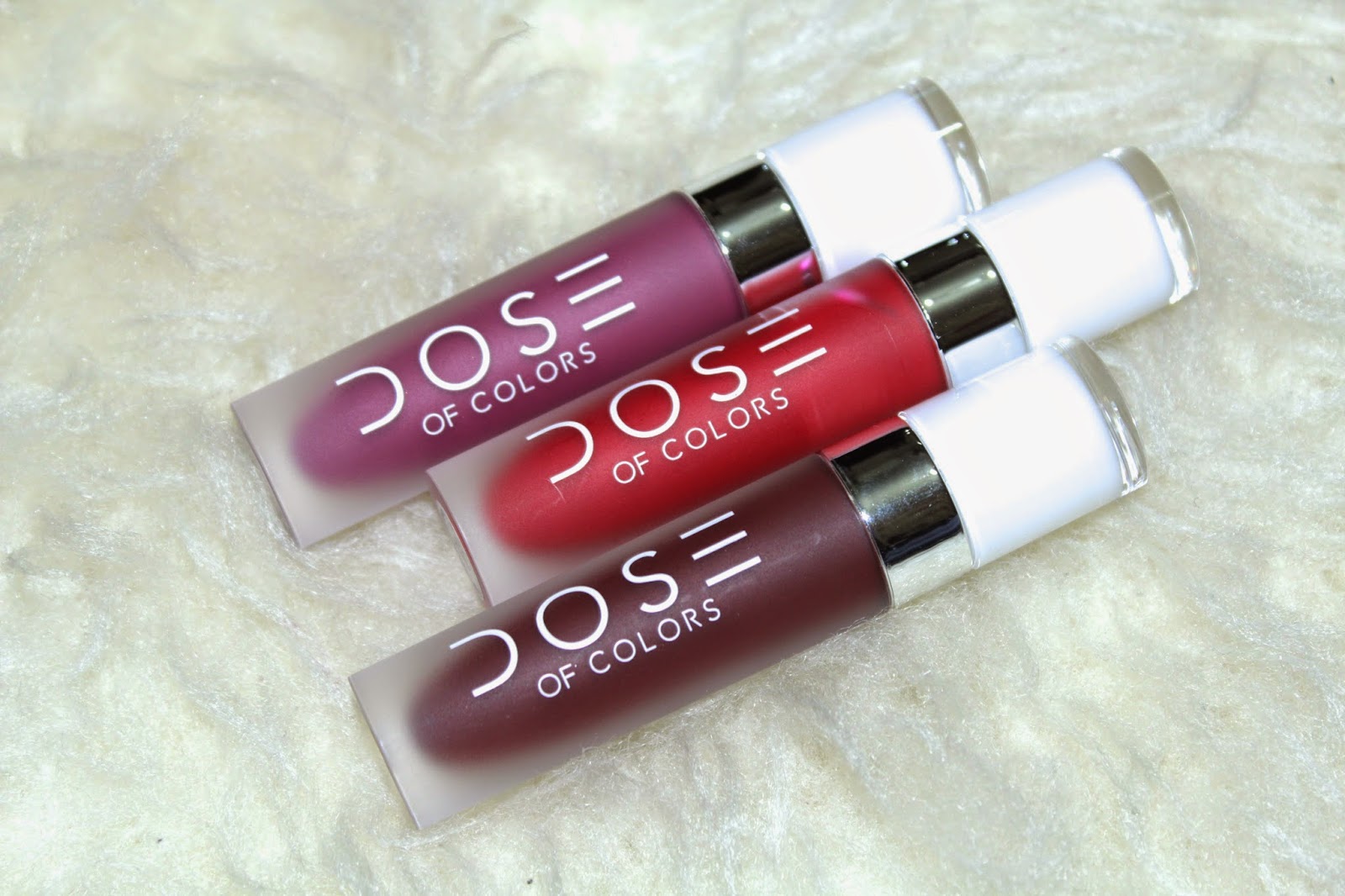 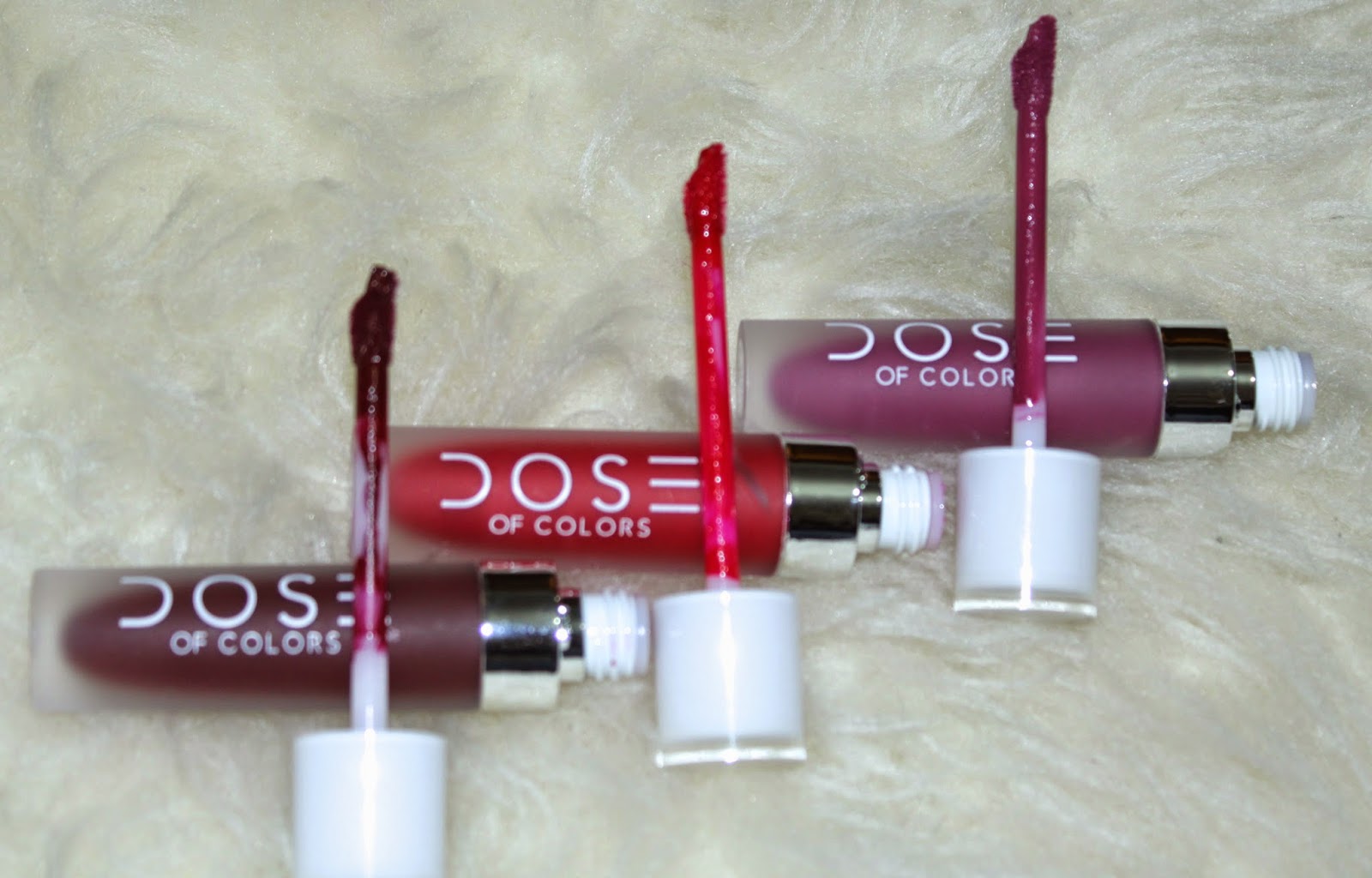 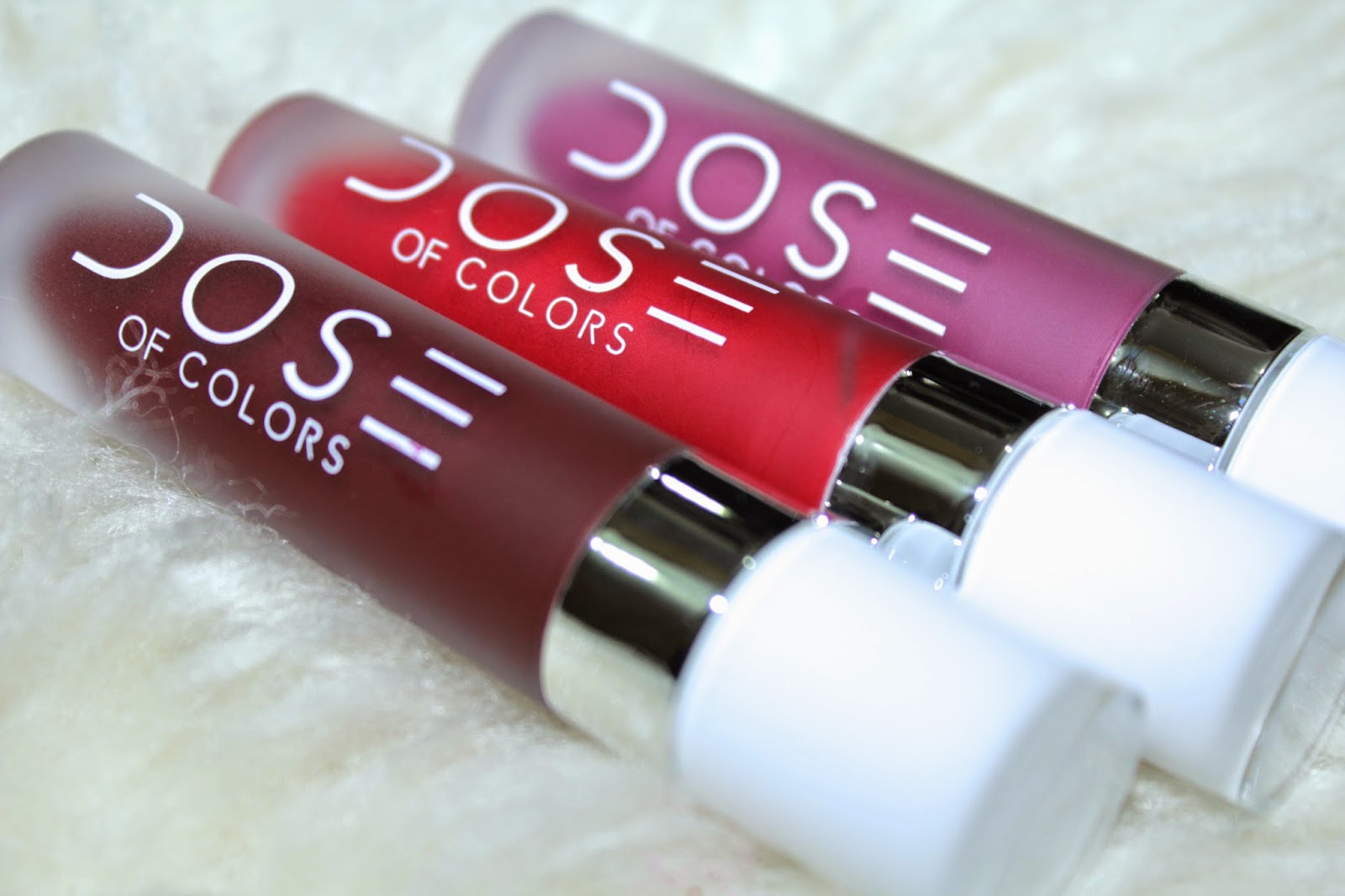 Recently Dose Of Colors released their limited edition shade Black Rose, which they had previously released at IMATs this time they gave everyone a chance to order online from their website. So being eager I waited for launch after much delay I managed to get my hands on it. I also picked up a couple of other shades and was going to pick up up Berry Me 2 which is a new shade but that sold out minutes before Black Rose was released.

I have previously tried a lipstick and lipgloss from their range and was  mega impressed but hadn't tried the liquid matte lipsticks so this was my first time trying this range from them. I also paid £20.00+ custom charges the last time I ordered with them but luckily this time I didnt pay any customs.

My package took roughly a week to arrive and its safe to say I was most excited for Black Rose after seeing swatches on @depechegurl this looked absolutely flawless on her.

First of all I picked up Berry Me as I love berry/purple shades I have a certain weakness for them inside lol! This is like mauve purple shade this is in person very different to their online swatches as are the other two shades which is a little bit of a downfall, I expected that with Black Rose anyway but not the other two shades, this shade has a mousse like texture but nothing thats difficult to work with in fact I prefer the texture of this the most.

Kiss Of Fire is probably the closes out of all three to online swatches even then in person it is more of a red based pink rather than the other way round as shown by them, this one is the one with the runniest texture out of all three but pretty easy to work with.

Finally Black Rose I had mixed expectations from this as I already expected the colour to be much different to what was displayed online as I'd done quite a detailed search on swatches. The texture firstly is the thickest out of all 3 shades somewhat difficult to work with as this is one that needs layering 2-3 times at least to get a even finish so the two points put together means you're left with a thick layer. It is pretty much a deep red version with no glitter particles of the ABH Sad Girl except the texture is much easier to work with Sad Girl its not as thick and a couple of layers max gives you the finish you need. Sad Girl is also a purple based shade but in terms of the depth of these colours they're both the same, Black Rose is also similar to Lime Crime's Wicked but a couple of tones darker.

Generally I have to admit these do last very ing without fadein on the inner lips Black Rose being a darker shade and thicker texture wears much quicker but the other two very faintly faded after a full days wear so I quite like them. I would say these are probably the longest wearing liquid lipsticks that don't fade on the inner lips as much out of all the ones I've tried so far. 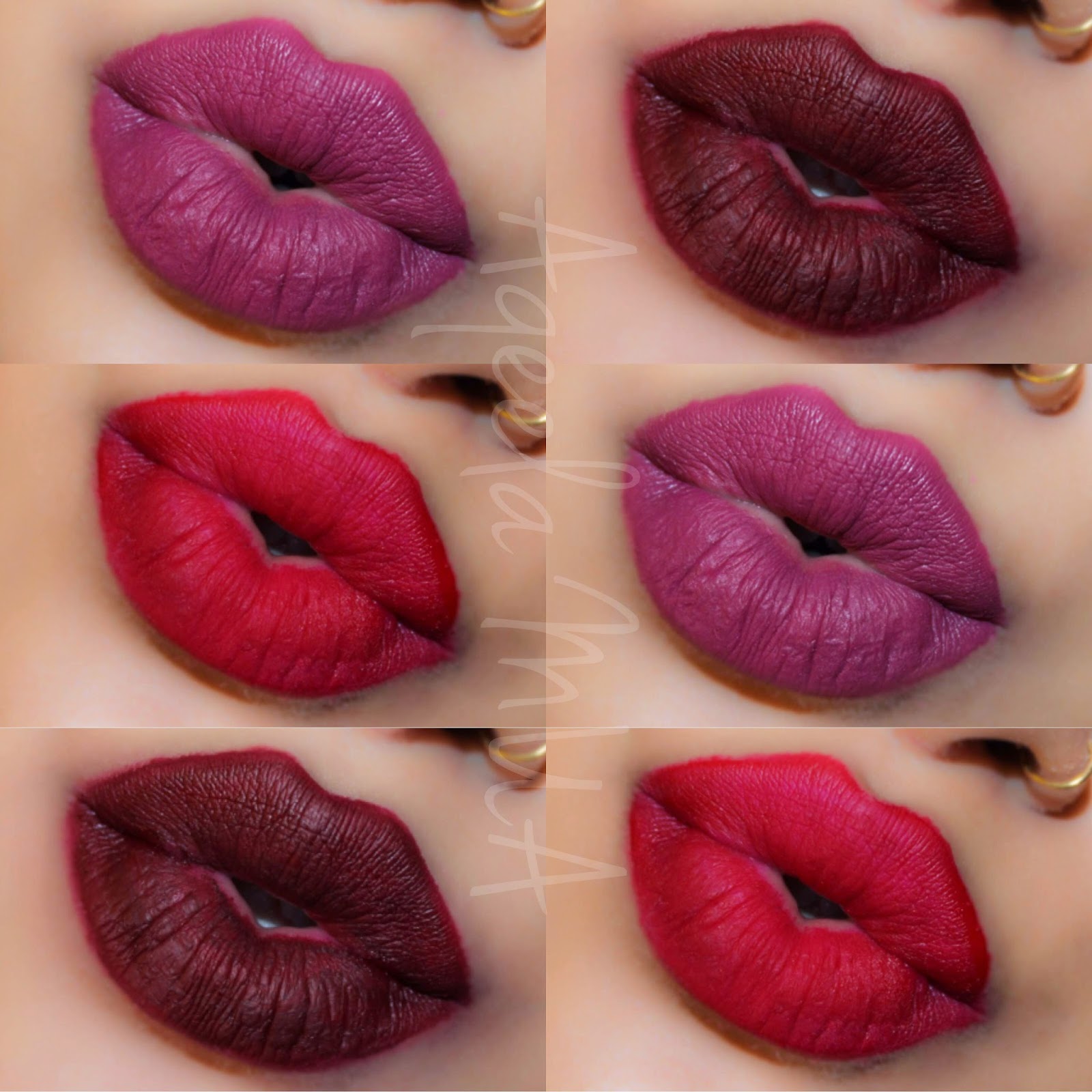